This post was first published on the Open Data Camp blog.

It’s several weeks since the third UK Open Data Camp. In case that means nothing to you:

‘Camp’ is a term commonly used to refer to an ‘unconference’, which basically means it’s an event with no predefined agenda – instead, attendees ‘pitch’ session ideas to each other.

‘Open’ means that the publisher of the data has made it available with little or no restriction on its use, as set out in a licence. The most common licence for public sector in the UK, is the Open Government Licence, which is usually referred to by its acronym, OGL. There are lots of other licences. For a detailed overview, take a look at the Guide to Open Licensing.

So, Open Data Camp is an event where people – from lots of different sectors, and with many different perspectives  – get together to discuss absolutely anything to do with open data. There’s also networking, socialising, and generally a good time is had by all.

Just a few of many who attended the third UK Open Data Camp.

There’s a widely held view that national events favour London. As the nation’s capital, and most densely populated city in the UK,  that’s perfectly understandable, but there’s a risk that other cities across the UK might be overlooked. From the outset, therefore, Open Data Camp has (so far) deliberately avoided the metropolis.

That’s not to say we don’t love London too – we do – it’s just that there’s loads of open data activity right across the UK, not in just one place.

Previously, Open Data Camp has pitched-up in Winchester (South-East), and Manchester (North West). This time, we were in Bristol, in the beautiful South West of England.*

There’s  masses going on in Bristol , and it’s a leading light in the UK Smart City scene with Bristol is Open – a joint venture between Bristol City Council and University of Bristol:

Using data sensors, smart city technologies will be able to respond in real-time to everyday events including congestion, waste management, entertainment events, e-democracy, energy supply and more. Together we are creating an open programmable city region.

Amongst (many) other things going on, there’s Bristol Girl Geeks and a very active South West Data Meetup. And, of course, Bath: Hacked is just down the road as well.

The timing for Open Data Camp was perfect for it to be featured as part of Digital Bristol Week – a week-long  series of workshops, masterclasses and other events, coordinated by the BBC Academy.

Our venue was the lovely Watershed – ‘Cultural cinema and digital creativity centre’ – right by the Harbourside. We were also really fortunate to have access to the adjoining Pervasive Media Studio, which meant that we had a large and really versatile space available.

Harbourside in Bristol (Watershed is the blue building on the right)

The introduction and session pitches were livestreamed both days, and are embedded below for your viewing pleasure. The pitches from both days were used as the basis for the session grid, which became the agenda for the weekend.

The list of sessions is also included to give you a flavour of what was discussed. Most of the sessions have notes taken by volunteers. N.B. The notes are blank for a small number of sessions. If you led or attended Open Data Camp and can add anything to the notes, please do.

Some people had *lots* of session ideas

I don’t have room here to go into detail about individual sessions. Fortunately, that’s not a problem because… 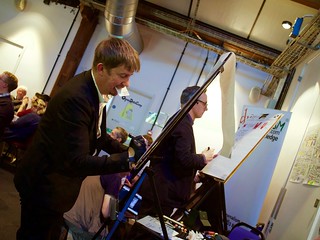 Two of the team from Drawnalism

Drawnalism were on-hand, with 2 artists AND 2 writers. Their output was phenomenal, with LOTS of drawings and blog posts published ‘live’ as the weekend progressed.

Many people have already blogged about their own experience of Open Data Camp, or have continued to build on themes identified during the weekend. Here’s a list of posts (so far):

Sometimes, nothing beats a big sheet of paper, with lots of post-its

There’s also a great Storify put together by Pauline Roche, and photos:

So, that’s it for this post. I’d just like to finish off by thanking everyone involved in making the third Open Data Camp such a success. This includes, but isn’t limited to: 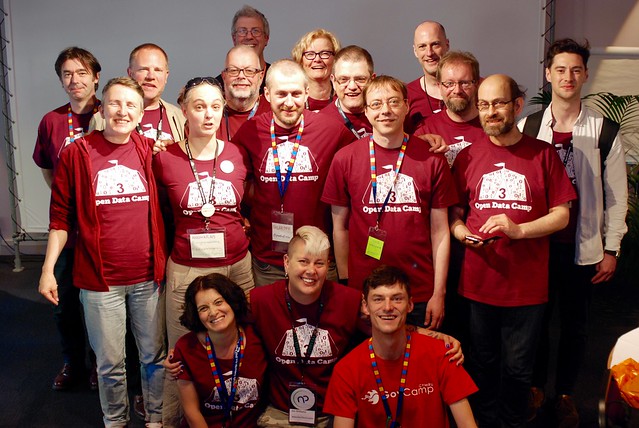 Open data Camp 3 (some of) the organisers and volunteers

* We are very aware that all three camps so far have been in England, whereas it’s ‘UK’ Open Data Camp. Don’t worry, we are on the case. Open Data Camp 4 will return towards the end of 2016, somewhere in the UK.